Visible Home
Brought to you by Visible, the investor engagement solution. Learn More. 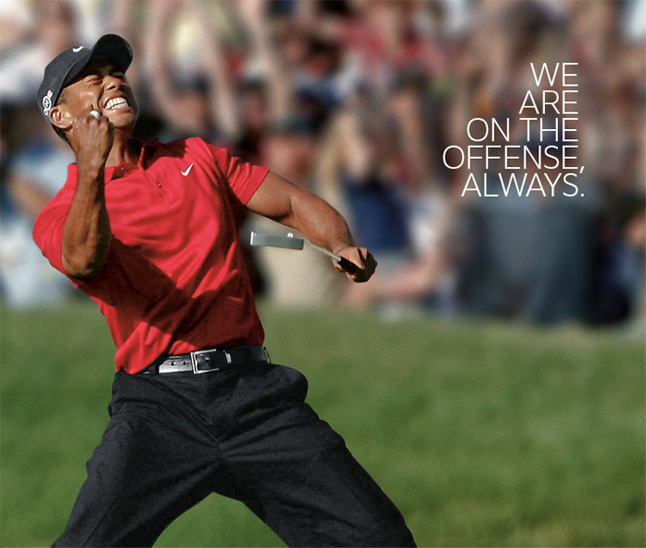 When Nike CEO Mark Parker sat down to pen his 2008 letter to shareholders, the company was in relatively good shape considering the world economy was in the midst of an economic meltdown. He had been in the job for about 2 and a half years and had just added $2.3 billion of incremental revenue – up 14 percent year over year – during fiscal 2008.

In January 2009, a dollar that had been invested in Nike just before Parker took over was worth significantly more than a dollar invested at the same time in top competitor Adidas or in the S&P 500. Unlike most companies during that same period, Nike’s stock had actually appreciated in value during those 2 and a half years.

All wasn’t perfect in the land of the Swoosh, however. In January 2009 the stock price dipped below the psychologically important $10 level and competition was increasing significantly.

In the U.S. footwear market, for example, #2 Adidas had been gaining market share for years, growing significantly faster than Nike. Add to that the under the radar growth of Under Armour and the entry of new players into the footwear and apparel markets and it was clear the company would be in for a long drawn out fight on multiple fronts.

Note: Emphasis, quotes, and charts in the letter below are mine. With historical letters like this, we try to point out how predictions and strategies played out in the market and what you can learn from what transpired.

When I stepped into the CEO role 2½ years ago, the leadership team reaffirmed a simple concept that I knew was true from my nearly 30 years of experience here – NIKE is a growth company. That fact shaped the long-term financial goals we outlined more than seven years ago. It also inspired our goal of reaching $23 billion in revenue by the end of fiscal 2011. Fiscal 2008 illustrated the power of that financial model, the strength of our team, and the ability of NIKE to bring innovative products and excitement to the marketplace.

While long term, Parker was right about the growth oriented nature of the business, the short-term patience his board was certainly tested.  Following the letter, Nike struggled to expand, shedding revenue for the next two years before jumping on its current trajectory.

The idea of Nike as a growth company is one that Parker and his team have rallied around to this day, as the headline on their investor relations website still features the tagline.

Our unique role as the innovator and leader in our industry enables us to drive consistent, long-term profitable growth. In 2008 we added $2.3 billion of incremental revenue to reach $18.6 billion – up 14 percent year over year with growth in every region and every business unit. Gross margins improved more than a percentage point to a new record high of 45%, and earnings per share grew 28 percent. We increased our return on invested capital by 250 basis points1, increased dividends by 23%, and bought back $1.2 billion in stock.

For a company to be able to say that while the world economy, and consumer confidence were melting down is impressive.

As we enter fiscal 2009 we are well-positioned for the future. The NIKE brand continues to grow in relevance and influence. We’re focused on six key categories – running, basketball, football, men’s training, women’s training and sportswear. Each category team is immersed in its sport’s culture, connecting with consumers and building deep relationships. These connections are the source of insights we use to create the innovative products that fill our pipeline. NIKE is a premium brand, and we earn that reputation by delivering experiences that surpass the expectations of our consumers.

Our portfolio of brands also continues to grow. Converse is mid-way through its 100th anniversary celebration. This brand delivered its best year ever in fiscal 2008 and continues to grow in the U.S. and in the key emerging markets of China, Russia and Brazil. Hurley and Cole Haan also had record years for revenue and pre-tax income. And NIKE Golf increased revenue and pre-tax income as we continue to deliver innovation and widen our lead as the largest apparel brand in the golf industry.

The popularity of golf, and of its biggest icon, Tiger Woods have fallen significantly in the years since Parker’s letter but Nike has managed to stave off some of the decline with revenue for the segment dropping only slightly over the last three years.

Growth in our portfolio of brands is only half the story. The other half is change.
Our portfolio is based on three things – pursuing the greatest growth opportunities; leveraging NIKE resources and capabilities; and serving consumers with premium products and experiences. In applying these three principles we saw opportunities to take action in 2008. We sold the Starter and Bauer businesses, and we acquired Umbro, one of the world’s great football brands and a source of tremendous growth potential for NIKE, Inc. as we continue to expand our position as the biggest football presence on the planet.

Like its China strategy, the investment in football (soccer to us Americans) has paid off. Nike is quickly catching up with #1 Adidas and is poised to capitalize on the growth of the game in its biggest market, the United States.

After all the work we have done this year, I’m very pleased with how we have enhanced the position, performance, and potential of all the brands and categories in the NIKE, Inc. family. They illustrate the commitment we have to athletes and the unique role we play in sports and the cultures that surround our consumers.

As I write this we’re heading into the Beijing Olympics – a moment that NIKE has been working toward for 30 years. NIKE is the number-one sports brand in China, which is also our largest sourcing country and our biggest market outside the U.S.

This insight is one of the keys to Nike’s recent and future growth. While still only accounting for 10% of overall revenue, sales in Greater China – which grew 30% to about $886MM  in the quarter ended August 31, 2015 – is by far the company’s fastest growing market.

During the past four years we have worked with thousands of athletes from more than 100 countries. We’ve gained valuable insights nobody else has and used them to design and deliver some of the best performance innovations NIKE has ever developed. From the Hyperdunk basketball shoe, Zoom Victory Spike, and LunaRacer to Swift apparel and the Pre Cool Vest – NIKE product innovation is setting new standards in all 28 Olympic sports. And we’ll continue to connect with Chinese consumers long after the Olympic torch goes out, bringing innovative products, retail experiences, and communications to this exciting marketplace.

We’ll give the world a chance to catch its breath from Beijing, but only for a minute.
On August 31 we launch The Human Race, the world’s biggest single running event in history – runners around the world competing and connecting simultaneously through the power of NIKE+ technology – raising funds for global causes with every mile. This is what NIKE is all about – innovating on multiple fronts and creating a bigger more vibrant marketplace. That’s what we do best and we’re doing it all over the world.

And our world is changing. The digital age is fueling change at its fastest rate in history.Power is in the hands of consumers. They have near infinite choices and unlimited access to those choices. The cost of entry into their world has risen dramatically. To be relevant, to be accepted, a company must bring its authentic self to market. For NIKE this means vast new opportunities to reach and reward consumers – with product innovation and compelling experiences at retail and online. We’re leveraging those opportunities by sharing our passion for sports and design and communications – our own never-ending story.

Again, this insight has proved prescient, as the company remains well positioned to  capitalize on the growth of digital and targets $7B in e-commerce revenue by 2020.

More than ever our story involves the commitment to innovate for a better world.
We’re very focused on creating products that reduce their environmental impact and showcase sustainable innovation. We’re committed to helping improve working conditions across the industry’s supply chain. And we continue to invest in our communities through programs like Let Me Play and our partnership with the Lance Armstrong Foundation. Every day we see how social and environmental change can promote innovation and growth in our business and in the world.

This year we were named one of the world’s most ethical companies (Ethisphere Magazine), one of the world’s top sustainable stocks (Sustainable Business and KLD), #3 in 100 Best Corporate Citizens (CRO Magazine), one of the 100 Best Places to Work (Fortune magazine), and the World Wildlife Fund and others have recognized NIKE for our work on climate change. I’m grateful that we’re being noticed for our contributions, but our work in this area is a journey. There is always more to do.

I’ll point to a $100 million partnership between the NIKE Foundation and Peter and Jennifer Buffett’s NoVo Foundation. Together we are creating an exciting new initiative called the Girl Effect. The premise of the Girl Effect is as simple as it is profound – when we invest in the health, safety and education of an adolescent girl, we create a ripple effect that improves her quality of life and that of everyone around her – her family, her village, her nation and, ultimately, all of us. Global research and experience show that investing in girls and creating the Girl Effect may be the most powerful missing piece to the puzzle of alleviating poverty.

For all we have accomplished this year, we remain humbled by the amazing things
we witnessed in the world of sports – Tiger Woods playing through pain to win the U.S. Open, Paul Pierce leading the Boston Celtics to their first NBA title in more than 20 years, the passion of a historic European Championships, and Rafael Nadal outlasting Roger Federer in the longest and most dramatic final in Wimbledon history.

It is epic moments like these – and the millions of everyday moments created by athletes around the world – that inspire us. Their dreams motivate us to create the most innovative product in sport, and to serve more fully every consumer who shares our passion for performance and excellence. That is our responsibility and our privilege.

As we move through fiscal 2009, now is not the time to be timid. We know that doing business as usual – doing what we’ve done in the past just a little bit better – is not enough.

As we’ve mentioned, Nike hit a rough patch shortly after this letter but has rebounded strongly and, despite its size, remains a growth company with a masterful handle on branding and digital marketing. 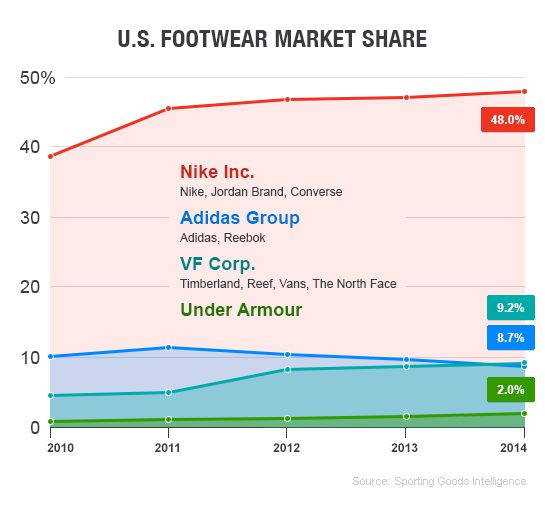 We are committed to the principals that got us here – innovation, consistency, and competitive fire. We’re focused on managing for growth. Where others retract, we reach out. Where some react, we create. We are on the offense, always.

I wouldn’t trade what we have with anybody in any industry.

There is, of course, no shortage of information to read about Nike and the massive success they have seen recently. Here are a couple quick places where you can go to get a better idea of what helped them get from where they were when Parker put together his report to shareholders to where they are today.

[Webinar Recap] From Deck to Check: Using Visible for Investor Updates & Fundraising
Mike’s Note #4 — All the Stuff I Got Wrong in 2019
Mike’s Note #3 — Is Debt the New Black?

We search the web for the best tips to attract, engage and close investors, then deliver them to thousands of inboxes every week. Want in?