If interacting with investors and following the market on a day to day basis has taught us anything, it is that VC investors have strong opinions. In addition to that, they like to make those opinions heard. Because of this, we started the Sentiment Index, a quarterly look at what is happening and what is to come in the early stage market. Along with our partners at Hyde Park Angels, We ask a series of questions, ending with an open ended one where the respondents can tell us anything they want to about the state of the market.

A few key themes emerged from the final question that are informative for both companies looking to scale their business or raise more money as well as investors hoping to better understand the landscape in different regions or keep a finger on the pulse of which sectors are heating up – maybe so they can go invest in some of the areas people aren’t talking about.

If you want to skip the investor quotes and dive right into the numbers and commentary, you can download the 30+ page report for free right here.

People have been talking about it for years and some of the numbers indicate it may be close to coming to fruition. 2014 was a record year for seed fund formation, while Series A capital hasn’t expanded at the quite the same rate. This is something our group of respondents seemed keenly aware of in their answers.

“Continue to see higher quality applicants for our seed stage investments but need more bridge money between seed and series a (that $500k to $1M raise).”

“We see a lot of cool companies at the seed stage, but they struggle to get to the $50-100K in monthly revenue that would enable them to be seriously considered for Series A rounds. They need more angel investment and to move faster to make progress quicker.”

“There is a glut of Seed funded companies doing well, but not well enough to grab one of the limited Series A slots. This playing out will shape a lot of what is to come in the near term.”

As insightful and instructive as the previous quotes are, however, we like this one the best:

“Not so concerned about the impending bubble…good/quality companies will continue to get funded in all market cycles…so stop worrying about what may be coming and build your fucking company!”

A major component of the Sentiment Index is how the venture landscape is evolving in different regions. Is it more competitive to get into good deals? What is the quality of the companies like compared to prior periods? How are valuations trending? This helps us evaluate how different locales are performing and which ones may be in for booms…or busts.

Investors in the Midwest have been consistently bullish on the stage of the regional market but seem well aware that there is still a lot of work to be done to catch more established venture markets like New York, Boston and Seattle.

“Seeing significant disparity between coastal and Midwest valuation. With valuations on the coasts being about 40-50% higher, but often the quality of Companies is even higher in Midwest. The bar for seed investment is being raised significantly, but valuation caps staying relatively constant in the Midwest. We are seeing companies with 30-40 material clients and 1-2 bigger enterprise clients raising a seed round.”

“Money is very slowly tricking into the Midwest, but not enough from a syndicate seed stage perspective. The region needs more significant doubles, triples, and a home runs in 2015 to attract more coastal money.”

While activity has continued to increase in Europe, the availability of later stage capital is a concern.

“Region that we are focusing our investments (Southeast Europe) is still at the very, very early stage in terms of opportunities – so we expect that in the coming years it can only go up as it matures.”

“Have seen increased quality of deal flow, but still lack of a relevant number of European players able to lead Series A+.” 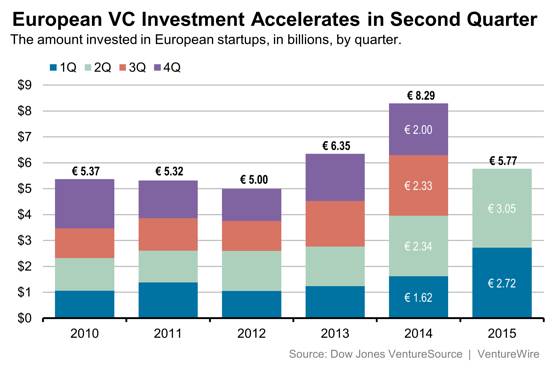 Some regions not always thought of as venture hotbeds are seeing activity pick up.

“I expect the travel industry to grow a lot in Iceland in the few coming months. Real estate prices are going to rise as well over the next 2 years.Three large funds just finished raising money in Iceland so investment at Seed to Series A is going to increase for the next 3-5 years. Hopefully we are going to see the value of companies grow along with it.”

“The # of funds for early stage companies in Australia is increasing. We will not see a super VC that matches the rest of the world, until there’s a big exit from existing seed/series A funds.”

“Optimistic about the opportunities in SA, however we worry about lack of a deep talent pool and consequences for the growth of the early stage businesses.”

Whether discussing funding strategies or company burn rates, many investors were talking about discipline in our survey.

“Worried that more and more problems are trying to be solved by pouring cash on them. Spray and pray approach is starting to make damage to early stage companies, as it becomes quite easy to get a first round of $ and then just burn it.”

“Valuations will mean terrible exits for most companies, only seed investors that manage to get into the Unicorns will make money.”

“I think the technologies and teams are compelling and will continue to be for the coming years. However, the competitive landscape and valuations are getting to the side of extreme. Market conditions and liquidity chasing deals will dry up if there is any correction in the public and PE markets, which I would guess will happen as interest rates increase.”

One of the most interesting parts of interacting with investors is learning more about which business models are emerging and how the way companies are getting funded is changing.

“AngelList and title 3 of the JOBS Act will fuel interest in early stage investments. Success stories emerging from online investments (Instacart via FundersClub, for example).”

“Wearables and IoT will see very few startups to succeed while VR has some major potential.”

“The investing networks are getting tighter which will drive better collaboration between funds to invest collectively in companies, rather than competing for the investments.”

Want more than quotes? You can dig into the numbers and commentary in our 30+ page Q2 2015 Sentiment Index. This quarter we partnered with Hyde Park Angels, one of the top angel groups in the country to add even more depth to the analysis.

Subscribe
Previous Article
Is Radical Transparency The Way Forward For Startup Marketing?
Next Article
Should You Send Investor Updates?

8 Ways to Level Up Your Investor Relations in 2023