Today’s letter takes a slightly different approach than most in the past. Instead of a CEO updating shareholders on the present and future of the business, this missive – from BlackRock’s Larry Fink – features a CEO sharing insight (and some harsh realities) with other CEOs…ones he and his firm have invested in.

In sharing advice with CEOs of some of the largest companies in the world, Fink touches on transparency, company-specific metrics, and the idea of getting key stakeholders aligned on where the business is heading – all things that are useful to businesses of any size and stage.

All of the charts, images, quotes, and emphasis below were added by us.

Over the past several years, I have written to the CEOs of leading companies urging resistance to the powerful forces of short-termism afflicting corporate behavior. Reducing these pressures and working instead to invest in long-term growth remains an issue of paramount importance for BlackRock’s clients, most of whom are saving for retirement and other long-term goals, as well as for the entire global economy.

While we’ve heard strong support from corporate leaders for taking such a long-term view, many companies continue to engage in practices that may undermine their ability to invest for the future. Dividends paid out by S&P 500 companies in 2015 amounted to the highest proportion of their earnings since 2009.

Prior to 1970, American corporations reinvested excess earning in their growth even more heavily. During the 1950’s for example, the 12-month Real Dividend per share never topped 15 and was under 10 for most of the 1940’s.

As of the end of the third quarter of 2015, buybacks were up 27% over 12 months. We certainly support returning excess cash to shareholders, but not at the expense of value-creating investment. We continue to urge companies to adopt balanced capital plans, appropriate for their respective industries, that support strategies for long-term growth.

For more on share buybacks and what they mean for both investors and for companies, check out this piece from CNBC.

We also believe that companies have an obligation to be open and transparent about their growth plans so that shareholders can evaluate them and companies’ progress in executing on those plans.

As a company, we have thought a ton about the value of transparency for early stage businesses. This guest post from Wagepoint’s Leena Thampan is a great place to start if you want to understand the benefits (and pitfalls) of business transparency.

We are asking that every CEO lay out for shareholders each year a strategic framework for long-term value creation. Additionally, because boards have a critical role to play in strategic planning, we believe CEOs should explicitly affirm that their boards have reviewed those plans. BlackRock’s corporate governance team, in their engagement with companies, will be looking for this framework and board review.

Annual shareholder letters and other communications to shareholders are too often backwards-looking and don’t do enough to articulate management’s vision and plans for the future. This perspective on the future, however, is what investors and all stakeholders truly need, including, for example, how the company is navigating the competitive landscape, how it is innovating, how it is adapting to technological disruption or geopolitical events, where it is investing and how it is developing its talent. As part of this effort, companies should work to develop financial metrics, suitable for each company and industry, that support a framework for long-term growth. Components of long-term compensation should be linked to these metrics.

Company and business-model specific metrics are things that we spend a ton of time working with companies to build. In many ways, the idea this work led to our first ebook, The Ultimate Guide to Startup Data Distribution. To give you an understanding of how we think about one of our company-specific metrics and fall in line with the principles of transparency that I mention above, here is a look at why we spend time tracking and trying to grow the number of Updates sent through Visible. 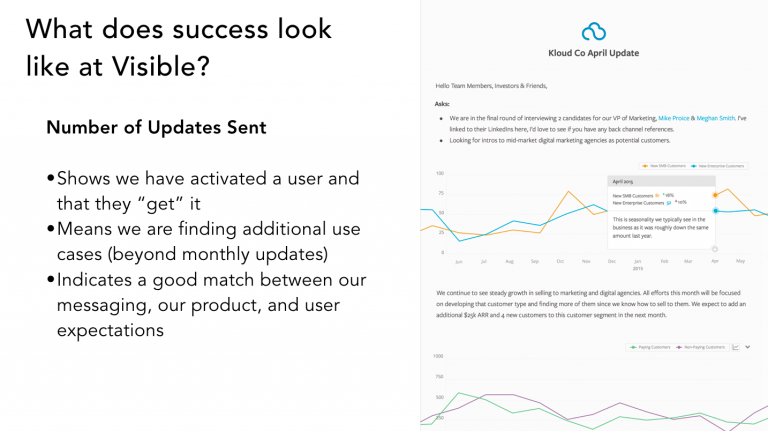 We recognize that companies operate in fluid environments and face a challenging mix of external dynamics. Given the right context, long-term shareholders will understand, and even expect, that you will need to pivot in response to the changing environments you are navigating. But one reason for investors’ short-term horizons is that companies have not sufficiently educated them about the ecosystems they are operating in, what their competitive threats are and how technology and other innovations are impacting their businesses.

Without clearly articulated plans, companies risk losing the faith of long-term investors. Companies also expose themselves to the pressures of investors focused on maximizing near-term profit at the expense of long-term value. Indeed, some short-term investors (and analysts) offer more compelling visions for companies than the companies themselves, allowing these perspectives to fill the void and build support for potentially destabilizing actions.

Those activists who focus on long-term value creation sometimes do offer better strategies than management. In those cases, BlackRock’s corporate governance team will support activist plans. During the 2015 proxy season, in the 18 largest U.S. proxy contests (as measured by market cap), BlackRock voted with activists 39% of the time.

Nonetheless, we believe that companies are usually better served when ideas for value creation are part of an overall framework developed and driven by the company, rather than forced upon them in a proxy fight. With a better understanding of your long-term strategy, the process by which it is determined, and the external factors affecting your business, shareholders can put your annual financial results in the proper context.

Over time, as companies do a better job laying out their long-term growth frameworks, the need diminishes for quarterly EPS guidance, and we would urge companies to move away from providing it. Today’s culture of quarterly earnings hysteria is totally contrary to the long-term approach we need. To be clear, we do believe companies should still report quarterly results – “long-termism” should not be a substitute for transparency – but CEOs should be more focused in these reports on demonstrating progress against their strategic plans than a one-penny deviation from their EPS targets or analyst consensus estimates.

With clearly communicated and understood long-term plans in place, quarterly earnings reports would be transformed from an instrument of incessant short-termism into a building block of long-term behavior. They would serve as a useful “electrocardiogram” for companies, providing information on how companies are performing against the “baseline EKG” of their long-term plan for value creation.

For early stage private companies, insert “Board Meetings” here. If you have clearly communicated your thought process behind major company decisions, the conversation becomes less focused on quick fixes and more on what can be done by all parties to support the long term aims of the business.

We also are proposing that companies explicitly affirm to shareholders that their boards have reviewed their strategic plans. This review should be a rigorous process that provides the board the necessary context and allows for a robust debate. Boards have an obligation to review, understand, discuss and challenge a company’s strategy.

Generating sustainable returns over time requires a sharper focus not only on governance, but also on environmental and social factors facing companies today. These issues offer both risks and opportunities, but for too long, companies have not considered them core to their business – even when the world’s political leaders are increasingly focused on them, as demonstrated by the Paris Climate Accord. Over the long-term, environmental, social and governance (ESG) issues – ranging from climate change to diversity to board effectiveness – have real and quantifiable financial impacts.

At companies where ESG issues are handled well, they are often a signal of operational excellence. BlackRock has been undertaking a multi-year effort to integrate ESG considerations into our investment processes, and we expect companies to have strategies to manage these issues. Recent action from the U.S. Department of Labor makes clear that pension fund fiduciaries can include ESG factors in their decision making as well. We recognize that the culture of short-term results is not something that can be solved by CEOs and their boards alone. Investors, the media and public officials all have a role to play. In Washington (and other capitals), long-term is often defined as simply the next election cycle, an attitude that is eroding the economic foundations of our country.

To be honest, ESG wasn’t something we were too familiar with before Fink’s letter, which prompted some research on our end.  Here is a quick article on why investors care about ESG initiatives.

Public officials must adopt policies that will support long-term value creation. Companies, for their part, must recognize that while advocating for more infrastructure or comprehensive tax reform may not bear fruit in the next quarter or two, the absence of effective long-term policies in these areas undermines the economic ecosystem in which companies function – and with it, their chances for long-term growth.

We note two areas, in particular, where policymakers taking a longer-term perspective could help support the growth of companies and the entire economy:

Over the past few years, we’ve seen more and more discussion around how to foster a long-term mindset. While these discussions are encouraging, we will only achieve our goal by changing practices and policies, and CEOs of America’s leading companies have a vital role to play in that debate.

Corporate leaders have historically been a source of optimism about the future of our economy. At a time when there is so much anxiety and uncertainty in the capital markets, in our political discourse and across our society more broadly, it is critical that investors in particular hear a forward-looking vision about your own company’s prospects and the public policy you need to achieve consistent, sustainable growth. The solutions to these challenges are in our hands, and I ask that you join me in helping to answer them.

Further Reading: Building for the Long-Term

One of the goals of Investor Letters is to highlight leaders who eschew short term results in favor of long-term gain for their companies, their employees, their customers, and their shareholders. Here are a few examples of that long term thinking from past investor letters.

The 12 Best VC Funds You Should Know About

10 Venture Capital Funds in Dallas You Need to Know